Battery alum Andy Parrino announced today that he will sign with the San Diego Padres organization.

Parrino, a Brockport High School and Le Moyne baseball baseball star, became the 12th position player and the 6th infielder to be selected in the amateur draft in Le Moyne College history. The junior shortstop and switch hitter was selected in the 26th round of the MLB Player Draft.

Andy has trained at The Battery since little league. He attended the Winter Baseball Academy every year from age 6 to 18, as well as baseball summer camps, and took weekly lessons with Battery instructors to improve his baseball skills.

Andy also played shortstop for The Battery ABC team in 2003 and 2004 before accepting a baseball scholarship to Le Moyne College in Syracuse.

“I have never seen a player with such a work ethic”, states Coach T, owner of the training facility in Gates. “He was in to practice daily, and even when he was away in college, we saw him every time he was in town. He even came to hit when he was home from the College World Series in Texas a week ago; he only had one day before reporting to play in the New England League, and there he was practicing. If anyone deserves a chance to play at a higher level, he certainly does.”

Coach T’s comments are also echoed by Jim Quamo, a veteran umpire from the Rochester Umpire Association. “I stopped at The Battery one evening to see Coach T, and Andy was there taking a few cuts. I said to myself, ‘this kid is going to go far, his work ethic is outstanding ‘ … I had just finished umpiring his high school game!”

“I have watched Andy mature from a little league player to one of the top Division I players in the country”, said coach Fred Tillinghast, a Le Moyne College grad who played for the Dolphins a decade ago. “He has spent thousands of hours training at The Battery and is the best all around infielder to come out of Western New Yor in the last fifteen years. I have played with and against current major League players like Eric Chavez, Aaron Boone, Sean Casey and Troy Glaus … and Andy has a good feel for the game as anyone I have ever seen. I do not know a talented player with the work ethic and drive that Andy possesses. He has a bright future in pro baseball and will be a tremendous addition to the San Diego Padres organization.”

Andy is off tomorrow to start his professional career with the Eugene (Oregon) Emeralds in the Northwest League. 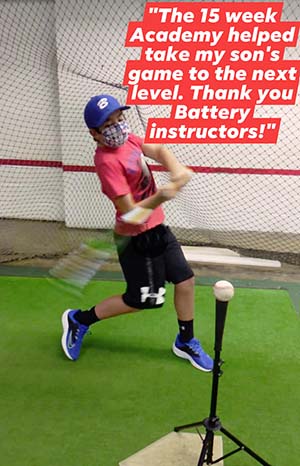